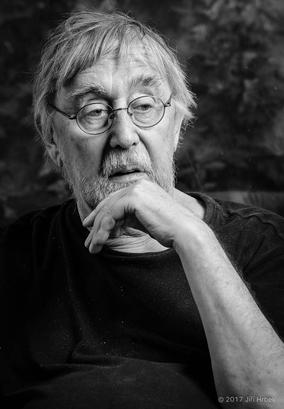 Olaf Hanel was born on 21 January 1943 in Prague and grew up in Světlá nad Sázavou in the Vysočina region. From 1960 to 1965 he studied art education at the Pedagogical Institute in Pardubice and began publishing his caricatures in various journals (Kultura, Plamen, Host do domu). From Pardubice he went directly to military service in Brno, where he was in command of a platoon of cooks and spent his evenings working on modelings in the basement of a textile technical school. From the mid-60s to the mid-70s he organized several distinctive happenings, whereupon he returned to more traditional and serene forms of art. From 1967 to 1970 he managed the Gallery of Graphic Art in Havlíčkův Brod. He organized exhibits for artists who were refused by the Bolshevik regime: Bohuslav Reynek, Ladislav Novák, and the husband and wife Naďa Plíšková and Karel Nepraš. After the August occupation by the Soviets, he refused to tolerate the bullying in the Vysočina region and moved to Prague, where he became a member of the famous Crusader School of Pure Art Without Jokes. He was employed by Armádní Film, he worked as a water pumper and after he signed Charter 77 as a stoker. In 1979 he emigrated to Vienna and from there to Montreal. In Canada he created his “wires,” statues from wire and graphics. In 1990 he returned to Prague and worked for twenty years as curator for the Czech Museum of Fine Arts (ČMVU) on Husova Street. He lives in Lysá nad Labem.
Pavlína Bartoňová