The 1970s and 80s was a period of artistic growth primarily for the emerging generation – both individual artists and artistic groups, for example The Stubborn Ones or group 12/15.

One of the most distinctive artists of the society Free Coalition 12/15 Better Late Than Never is Václav Bláha. He belongs to the generation of artists who entered the art scene during a time that was very problematic for artistic production, both societally and politically. It is also here, under conditions of oppression, that we also find an artist seeking out the internal existential image of man. His pictures of the time, inclined, precariously balanced figures, are at the same time a symbol of the internal uncertainty of the individual.

The concentration on human fate, the variable landscape of experiences, emotions, doubts, but also shared happinesses can be found in another aspect of his artistic works. At the same time, however, he does not close himself off and concentrate on the intimate form, but precisely the opposite. Many of his achievements approach the monumental, not only in their format, but in their spatial arrangement as well. His installation in the German district of Eschlkam is a blending of images oscillating between earth and sky. His piece from 2001, Rivulet of my Youth, is not only a preserved record of objects, but also of time. Many of his images and installations are a frank testimony relating personal and physical experiences. At the same time, however, they also serve as a symbol of the universal reality of mankind.

The cycle Messages is yet another significant aspect of Václav Bláha’s work, in which he often employs brief texts. The artist focuses on peculiar communications with his surroundings. He thus imparts indications of his intimate feelings, which simultaneously assume external and universal significance. Later his Tales emerged as well, reflections of his own experiences and relationships. Often his paintings become and mere macrostructures –coloured expressions of planes and space.

At the exhibition, we also encounter diverse forms, from the merest gesture, as in the pictures Daybreak and Oh, my love…, to larger structural images such as Figural Landscapes. This seeming blurriness reveals further possibilities for Bláha’s work, which assume ever newer and innovative forms. It is obvious that even in this context his idiosyncratic apprehension of human life experiences remain a fundamental story he has constantly before his eyes.
Zdeněk Freisleben

While viewing the exhibition, you can listen to Václav Bláha’s commentary.
Image photos © Magdaléna Bláhová 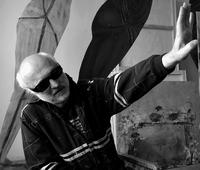 “… it is morning, and I awoke crushed by the pink dawn and sediment of the sky, which cast down strange pearls of doubt beyond my windows.” Václav Bláha

Václav Bláha is the foremost representative of the generation of Czech artists who began their professional careers during the desolate period of “normalization” repression in the 1970s. His figural subject matter from the seventies and eighties tends toward the isolated individual, constrained within some kind of fateful existential web of being, a heaviness weighing down and deforming the individual through ineluctable pressure. From this point on, the materiality of his work is intensified, and the concept of how this process is interwoven plays a fundamental role in Bláha’s pictorial speech.

A thick coloured mass like “meat” and the exposed lower layers of the image like “bone” set the stage for Bláha’s human dramas. We see that the figure is not so much a protagonist acting independently, but rather a permeable and integral component of its psychological environment, which is perhaps most evident in Bláha’s cycles “Notes” and “News”, which emerged in the nineties. Here the human creature becomes more and more an incorporeal presence, a form that slowly fades away into a variegated grid. Also distinctive are the words, or better yet, the news addressed by the artist to himself in the form of excerpted confessional meditations. These missives, however, are not simply to be read– they serve as dynamic calligraphic signs, but also as a symbolic flowing of internal thoughts. The individual works can be folded like blocks of a mosaic into larger variable wholes, both compositionally and spatially. Bláha employs this characteristic technique even in his new works, which are summed up conceptually under the title “Tales.”

The surroundings are the primary focal point of the author’s investigation, which he approaches quite expressively. The human figure is intimately connected to everything surrounding it (on the level of relationships, history, nature, politics and society). The human form here functions not only as a dynamic agent but also as a victim of external interventions. It is logical that the artist continued this continual impulse in several projects conceived as three-dimensional installations, whose meaning is activated only by the physical presence of the viewer who enters into and passes through them, leaving his own traces and even participating in the duration of the work, its wearing out and eventual destruction. Bláha’s symbolic gags are the central location where the concretely limited consciousness of the individual merges with the vaguely perceptible rhythm of collective human fate. The artist’s eternally “afflicted” person is primarily himself; later, however, it also becomes the personification of all questions concerning mortal existence.

In a cycle of pictures from the years 2006–2007, the artist reflects upon the actual situation in which he ended up, “surrounded” by the water element. His initially prosaic experience stimulated thoughts on the uncertain place of a person caught up among the most varied influences. Here we find a characteristic sign of Bláha’s attestation: clouds and rain create a dynamic construct restricting the human space. The individual, however, is at the same time permeated by the cage itself and interconnected with other human creatures. Without the necessity of more immediate references, Václav Bláha provides a personal account whose metaphoric speech of structure and movement expresses more general reflections on the place of man in the ever-changing grid of nature and existence.

Václav Bláha’s new pictures show the actual form of the aforementioned characteristics: monumental corporeal fragments continually intertwine into a “chequered being”. Figural contours dissolve to create a pattern of diminutive pools formed from luminous points of stars or sunlight on grass. The “peculiar figure” tenaciously sets out again and again on his journey in time and space. Besides tones of existential cruelty, we also find here more apparent compassion (perhaps even slightly romantic reverberations) in the artist’s systematic treatment of human frailty. Reflections of the personal and societal desperate and hopeless condition, determining the concept of Bláha’s first mature works of the 1970s have long alternated with his “driving preoccupation” with an intimate emotional life and an inquiring wonder at the natural and arching phenomena of the greatest mystery – the universe. Here we see also Bláha’s unconcealed irony manifested in a subtle undertone of (self)critical humour, but which primarily emphasizes doubt as a necessary component of the path to knowledge of oneself and of the world.

Bláha is a face turned upward toward the sky. His works bear witness to everything that this “higher sphere” brings to a person’s life, in both the positive and negative senses.
Richard Drury, text for the exhibition in the gallery Sýpka in Valašské Meziříčí in 2009

Beautiful and Loathsome Fragments of Figures, the City, Life and the Universe

One of the most distinctive artists of the society Free Coalition 12/15 Better Late Than Never is Václav Bláha. He belongs to the generation of artists who entered the art scene during a time that was very problematic for artistic production, both societally and politically. It is also here, under conditions of ... more 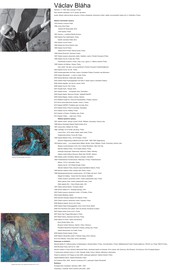 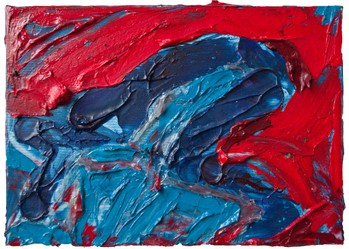 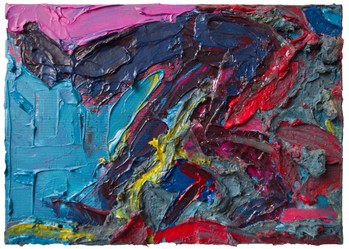 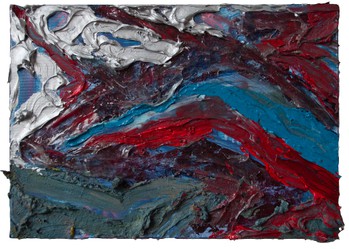 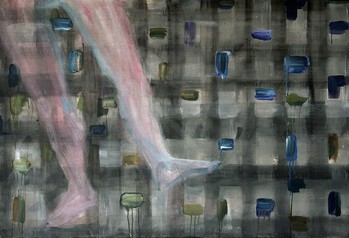 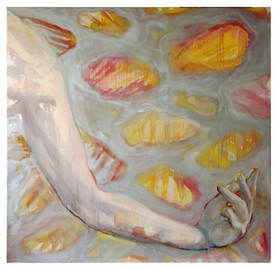 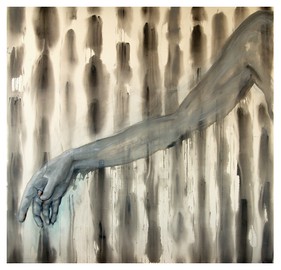 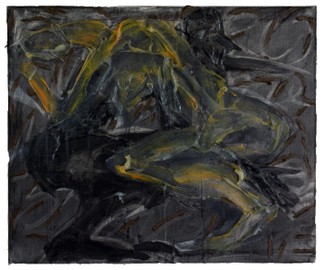 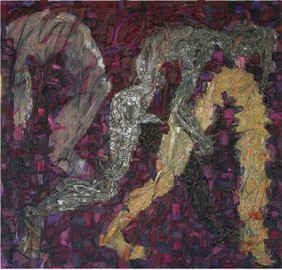 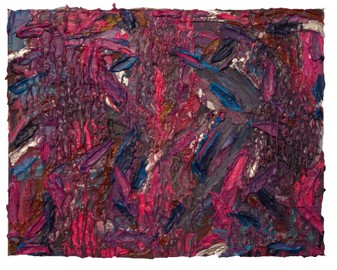 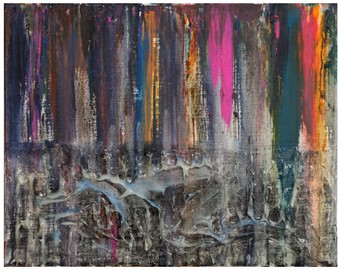 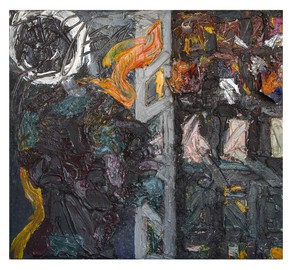 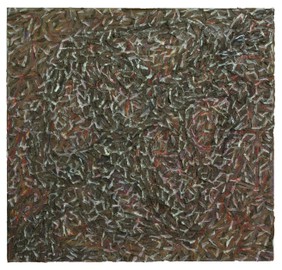 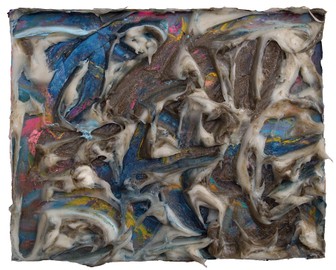 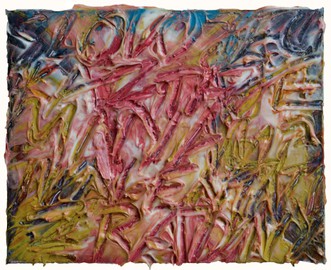 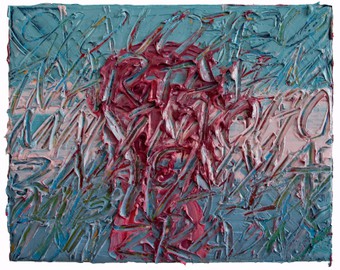 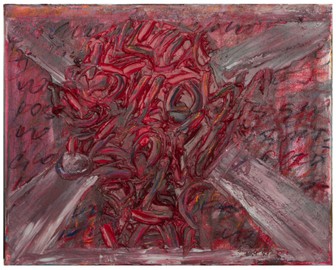 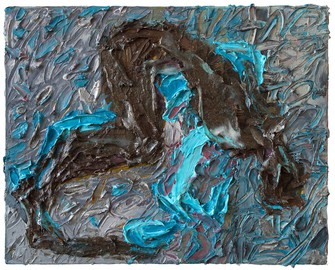 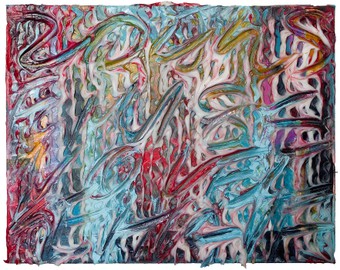 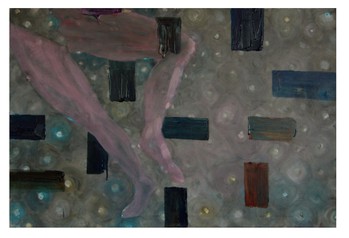 Woman in the Morning Glistening, 2006 Inaccessible Nebula Above You, 2003 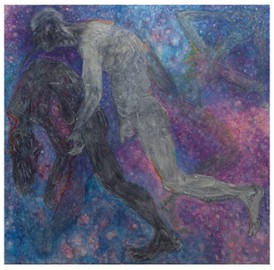 Fragments of My Universe, 2013 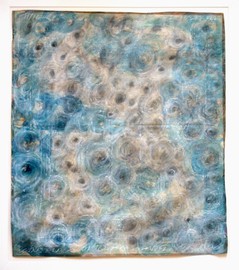 Inaccessible Longing Above Me, 2002