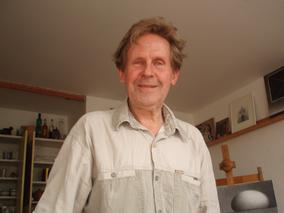 As a young boy I used to go with my parents to a gallery of gothic art. Then at home I would paint pictures of Madonnas and castles based on the work of August Sedláček. According to instructions by painter Cennino Cennini I mashed up berries from the Virginia creeper plant to create a beautiful color for the mantle of my Madonnas. My father was an architect and designed beautiful cathedrals which, however, were never built. I loved El Greco and wanted to devote myself to religious art, but the period thought otherwise. When I became an adult I was in danger of being arrested for parasitism. So I accepted a job (as a librarian and later a commercial graphic artist) and, among other things, began to devote myself to various artistic activities. I installed exhibits, painted posters, carved nativity scenes, glued together and calculated letters/type [lepil a pocital pismenka]. I assumed that here I would be able to apply all of my abilities. After all, gothic and antiquated art was clearly applied art, created for someone and with a clear objective, where the “artist” could remain anonymous. But after a time I started to realize that all of my activity had a certain limitation. Metaphorically one could say that it did not nourish the soul. I could never completely forget that at one time a person was alone with his pen and pencil and that this was more nutritious fare.  At times, whenever possible I would return to my subjects which in various ways would become transformed and influence one another. Seas, structures, objects, human figures. I kept drawing them over and over, and often the drawings served simply as a confirmation that this was not the way to go. Often, however, this led me upon the proper path, which was for me always the most important. Sometimes I would wander for a long time in the dark, but then the joy was all the greater when I came upon it. It seemed to me to make sense.
Václav Sokol

The draughtsman, illustrator, typographer and graphic artist Václav Sokol was born in 1938 in Prague. He studied at the High Art School of Václav Hollar and trained under Professor Jaroslav Vodrážka at the Academy of Fine Arts in Prague. He was rejected from university five times for ideological reasons. In the 1960s he worked as a librarian at the Museum of Literature at the Strahov Library, and from 1971 to 1990 he worked in the promotional department of the Department of Roads and Railways. In 1978 he signed Charter 77 and of course “achieved” the position of doorman only ten years later. From 1993 to 1999 he worked as a graphic artist for the bi-weekly Architekt. He has published articles on graphic art in the journals Katolický týdeník, Perspektivy, Čmelák a svět and Revolver Revue. He currently works on graphic book design for Triáda Publishers and the Arts and Theatre Institute.

Among other books he has illustrated the The Message of Jesus (a retelling of the New Testament by Jan Sokol, 1969), Discourse on Wisdom by Gregory Skovoroda (under the pseudonym Miloš Ševčík, 1983) and Readings from the Bible (the most well known and beautiful stories from the Old and New Testaments, selected and interpreted by Jan Sokol, 1996). He is the creator of the nativity scene in the church at Odolena Voda (1985–1988).