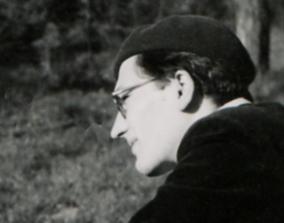 Mrázek is impressed by the exhibition of modern French art at Mánes. Meets Václav Boštík at the Arnošt dormitory in Prague at an exhibition of young artists.

Graduates Real Gymnasium. An unsuccessful attempt to enter the studio of Willi Nowak at the Academy of Fine Arts in Prague, where Václav Boštík is studying at the time. Studies drawing at the Technical University in Prague under prof. Cyril Bouda, Oldřich Blažíček and Josef Sejpka. After the schools are closed by the Nazis, he studies at the Ceramic School in Prague.

Unsuccessfully attempts to be admitted to the School of Applied Arts in Prague. First automatic drawings. Passes the exams at the State Graphic School in Prague. Studies for a year with Richard Lander and Zdeněk Balaš, who greatly influences his further artistic development. Meets Adriena Šimotová, Jiří John and Jiří Šindler.

Admitted to the School of Applied Arts. School closed by the Nazis the following year.

Marries the painter Daisy Troníčková. Leaves Prague with his wife and spends a year in the Bohemian-Moravian highlands in the village of Březiny u Svratky. Works for the architect ing. Jaroslav Čermák and designs applied art for church buildings.

Studies at the School of Applied Arts (since 1948 at the Academy of Arts, Architecture and Design) in the studio of prof. Josef Kaplický, his classmates are Adriena Šimotová, Jiří John and Jiří Šindler.

Graduates from the Academy of Arts, Architecture and Design. By this time, he has three children. In the 1950s and 1960s works as a designer of Textile production in the woven textile studio of prof. Antonín Kybal (later the Institute of Housing and Clothing Culture, aka UBOK). In the mid-1950s Jindřich Chalupecký and Václav Bartovský work here. Becomes a member of the applied art creative group Balance.

Included in the II. Regional Center of the Union of Czechoslovak Graphic Artists, Umělecká beseda, in the section of applied arts.

The Textile Studio, of which he was a member, won the Grand Prix at the Czechoslovak Pavilion at the World Exhibition in Brussels. Trip to Brussels.

First solo exhibition in the Aleš Hall of Umělecká beseda in Prague. The exhibition is prepared by Václav Bartovský. Trip to Paris with the Institute of Fashion and Design (ÚBOK).

Solo exhibition at the Václav Špála Gallery in Prague. Jiří Mrázek exhibits abstract paintings. The exhibition was attended by the American Lee Freeman from Chicago, who becomes his lifelong collector. Thanks to his support, he is able to leave his job at ÚBOK and pursue freelance work. Trip to England.

Wins important awards at tapestry exhibitions in Menton and Liège.

Mrázek's tapestries are awarded a gold medal at the Czechoslovak Tapestry Exhibition in Prague.

Trip to the United States.

Solo exhibition at the Platýz Gallery in Prague, organized by Ludmila Vachtová.
With the advent of Normalization, the group UB 12 began to dissolve and was officially banned in 1970.