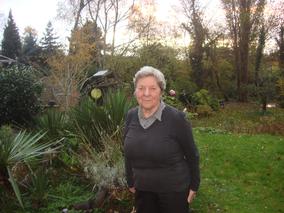 Elsi Kyncl, neé Spitmann, was born 16 May 1930 in Essen. Her father was an architect and contractor who owned a large design agency. Upon the wishes of her father, she left high school before graduating and started working in his office as a draughtswoman. At the same time, she began taking private drawing lessons. At work she met the artist Ferdinand Spindler who moved in the circle of the avant-garde group Zero in Gelsenkirchen. F. Spindler provided her further artistic training, and she later became his wife. From 1957 they lived together in Gelsenkirchen, later in the artists’ colony Halfmannshof located near the city. Here Elsi helped organized exhibitions and in 1968 participated with her husband in Art-chema in Pardubice, where she met František Kyncl, who later became her second husband.

From the beginning of the 1970s she lived with František Kyncl in Düsseldorf. During this time she practically ceased her artistic activity and devoted her talent to her husband, the painter František Kyncl. She began working in one of the most important private German galleries, Gallery Hans Mayer in Düsseldorf. She has not ceased working entirely, however. Gradually she is transforming the plot of land near the house, in which she lived with her husband and in which she still lives, into her largest work yet. Bit by bit, she has transformed the plot into a spectacular garden in which everything comes across as natural. Flowers, trees, bushes, a small lake with fish, small artworks, a number of bird feeders and birdhouses fashioned by hand. The imposing work, which requires at least a little of Elsi’s time each day. Her reward is the natural beauty and song of several dozens of the most varied birds that have found a home in the garden.
Jan Placák