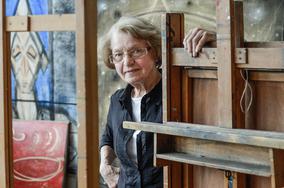 Věra Nováková was born in Prague on 17 January 1928. During the war she studied at a classical gymnasium and in 1947 was accepted at the Academy of Fine Arts. In 1949 after the Communist putsch, she was expelled from her studies in her fourth semester during political screenings. In 1950 she was accepted into the third year at the Academy of Arts, Architecture, and Design. Beginning in 1958, she was given official permission to support herself through her artistic work, but she was not allowed to exhibit. She never applied to the Union of Czechoslovak Artists. She did illustrations for technical publications and later for children’s books and also copied fragments at the Institute of Archeology. At the same time, she continued, and continues, to devote herself to her own, independent work.

The motifs of Věra Nováková’s paintings and statues find their origin in classical literature, the biblical canon, as well as in the polemics between the two — similar to the work of Friedrich Nietzsche. Her conversion or awakening to traditional themes has, from the beginning, been accompanied by a polemic against mankind’s delusions of grandeur. Beginning with the wartime and postwar horrors of Věra’s youth, through the period of Normalization, and up to the post-Communist years, the artist has been constantly posing the question: Who is the genuine human being, the Son of Man or the Superman?
David Bartoň