„Crossroads“, a new joint project by ABCD and the Museum Montanelli presents works by three contemporary international art brut artists who share a common theme: the city as a place for life. With his three-dimensional residential modules and their elaborate interior furnishings, German artist Stefan Häfner creates his own vision of the “city of the future.” Belgium’s Marcel Schmitz produces drawings, paintings, and graphic works through which he explores the anonymous city as a monotonous planned structure composed of various layers of two-dimensional planes. On pieces of paper pasted together into strips several meters long, the recently discovered Czech artist Ota Prouza draws endless tangles of roads, highway interchanges, railroads and tracks surrounded by skyscrapers seen from a bird’s-eye perspective. All three “mental urbanists” present their vision of an absolutely depopulated or dehumanized future in which there is no more place for man because the buildings, roads, and rails have taken on a life of their own. It is as if the city has metamorphosed into a sprawling organism that has consumed human society, which by its own hypertrophy has forfeited its right to exist. The city’s windows are transformed into thousands of mosaic-like insect eyes, the roads are like arteries whose intersections resemble bodily organs, trucks and trains take on anthropomorphic features. They are “different cities” – though born of human design, they no longer need mankind for their existence. They throb with their own pulse, they feed themselves and live their own lives. We encounter them on “The Day After,” immediately following a catastrophe that has passed without notice.

What news of the world do these artists offer us? Does our civilization stand at a crossroads? Are these cities of the future, whose silence is almost agonizing, a physical embodiment of post-apocalyptic megalopolises in which time and motion has stopped – mere lights flickering within the infinite space of the universe? Or do they perhaps offer hope, are they a refuge, a hive in which mankind may survive in anonymous harmony?

Doc. IVANA BRÁDKOVÁ, vice chairwoman ABCD. Graduated from the Theatre Faculty of the Academy of Performing Arts, Department of Stage Design. She collaborates with numerous professional theatres and the public-service Czech Television. She created about 400 mainly costume stage designs for theatre, TV and film. She received the degree Associate Professor (doc.) in 2005.

TEREZIE ZEMÁNKOVÁ, Ph.D., chairwoman ABCD. Graduated from the Philosophical Faculty of the Charles University in Prague, field Theory of Culture, and also studied at the Paris Sorbonna. Her dissertation focused on the subject of Art Brut in the perspective of Cultural Studies. She is active as independent cultural journalist and publicist and exhibition curator.

Prof. MUDr. DADJA ALTENBURG-KOHL, physician, philanthropist. Founder of the Museum Montanelli in Prague. Advisor to the Europäisches Kulturforum in Berlin. Mrs. Altenburg-Kohl has curated dozens of exhibits at home and abroad, where she has presented Czech art at leading cultural institutions for more than 20 years. She is also an art collector and the curator and director of the Museum Montanelli. 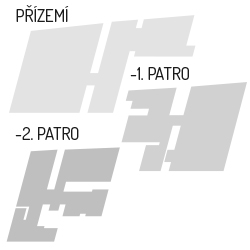 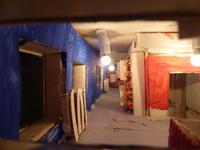 Stefan Häfner (*1959) works at the Atelier Goldstein, a workshop primarily for autistic artists in Frankfurt-am-Main. Häfner’s work can be found in the collection of the German Architecture Museum (Deutsches Architekturmuseum). Häfner’s lifetime project is his so-called “Zukunftsstadt” – the city of the future, a complex of three-dimensional residential modules that have grown together to form one single organism. His buildings, made of cardboard and other materials, are connected by elaborate sidewalks, stairways, and catwalks, as well as parking lots, overpasses, and underpasses. The stairwells and courtyards – sometimes open, sometimes covered – are lined with trees, and the public spaces are lit by electric lamps. Rooftops are covered in solar panels, and underground garages await the arrival of vehicles. But there are no vehicles, nor are there books on the bookshelves in the colorfully painted interiors we can explore through the countless windows. In the hallways, climbing vines creep up rounded columns, and the various units are furnished with beds, tables and chairs, even computers… but there are no people. Häfner’s habitats stand proudly on their outspread thin legs, as if to protect the city from a flood, looking out into the unknown through colorfully illuminated windows reminiscent of insect eyes. Are his cities of the future giant lifeboats, a Noah’s ark for a threatened mankind, or are they an apocalyptic vision of what our cities will look like on “The Day After?” 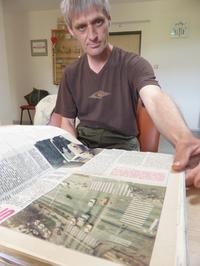 For more than 50 years, Ota Prouza (*1959) has lived in a home for the physically handicapped in the town of Brtníky on the edge of northern Bohemia’s Czech Switzerland National Park. Despite all this time living in a rural setting of villages, forests and nature, he has spent all his life fascinated by the hustle and bustle of the big city, by highways, railways, and everything associated with urban infrastructure. He regularly buys books, calendars and magazines with photographs of the city: skyscrapers, streetcars, trains, and highway interchanges. Although he sometimes explores natural subjects (primarily herds of deer and birds in wildly-branching treetops), his main source of inspiration is clearly civilization, and he captures its pulse in drawings made using pencil, crayons, permanent marker, and pen on sheets of paper that he pastes together into strips that sometimes extend for several meters. His color spectrum depends on his current mood, often also on “whatever is at hand.” He often spends several weeks working on one drawing.

Another of Prouza’s obsessive subjects are hornets, which visit him in his dreams. His fear of them and his fascination with their strange beauty are so strong that these themes sometimes take precedence over urban life and appear in paintings the size of trucks, crowded together in swarms in all their nightmarishness and terrifying beauty.

Ota Prouza is almost always on the move. He does not waste time. In addition to working at the home, he goes on daily walks in the nearby surroundings, several kilometers at a time. In the evening, he settles down to his art and, perhaps influenced by the things he saw on his walk, escapes into grand journeys with no limits on time, possibilities or space, exploring international metropolises no smaller than Prague, New York, or Tokyo. Their skyscrapers, and especially their endless crisscrossing roads and rails with trucks, trains, streetcars, firetrucks and ambulances, are depicted from a bird’s-eye to create a series of images of his never-ending grand “trip.” 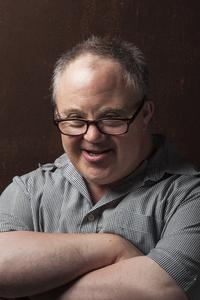 Marcel Schmitz (*1966) was born in the town of Bastogne in eastern Belgium. He has worked at the La “S” Grand Atelier workshop for mentally handicapped artists in nearby Vielsalm since 2007. One of his defining characteristics is the fact that he was born with Down Syndrome. In terms of subject matter, Schmitz’s art is narrowly focused on the theme of urban architecture. Whether making three-dimensional objects from paper or layered drawings and graphic works, Schmitz is always exploring imaginary cityscapes. In his drawings and paintings, cities are disassembled into individual planes, and the buildings – made up of dozens of windows – overlap one another on the paper like multiple photographic exposures. He freely combines drawing with painting and printmaking, in particular linocut monotypes. Marcel Schmitz creates technical drawings and floorplans, sometimes both at once, and likes to use bird’s-eye view (or rather, plane’s-eye view) perspectives to give his works a highly personal, hallucinatory dimension. Only occasionally do vehicles traverse his uninhabited cities, as if they were trying to give these alienating places a sense of human scale. These concrete elements link Schmitz’s works with their real-life counterparts; otherwise, his creations might feel like sophisticated abstract collages. Schmitz like to turn his cities into three-dimensional models that he shrouds in embroidered fabrics and covers in printed papers. His models, drawings, and paintings transform solid, structured reality into dreamlike perspectives that capture the essence of the city – its monumentality and anonymity, but also its unique poetry – with a remarkable convincingness and intensity. 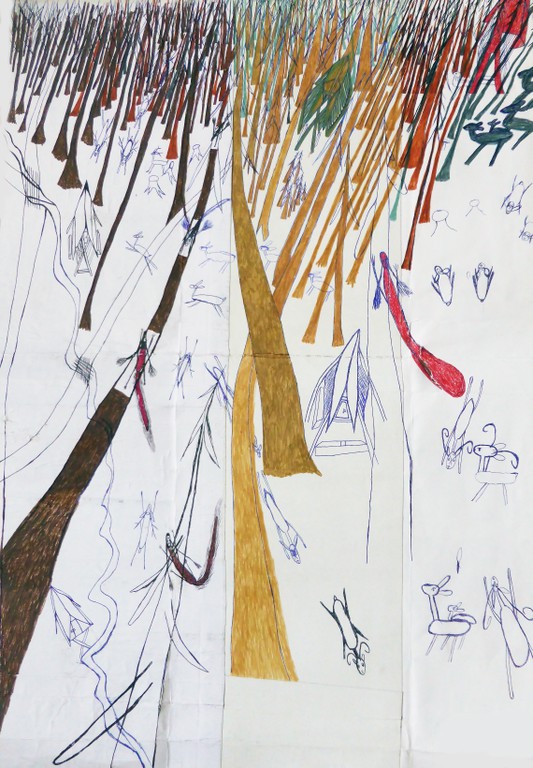 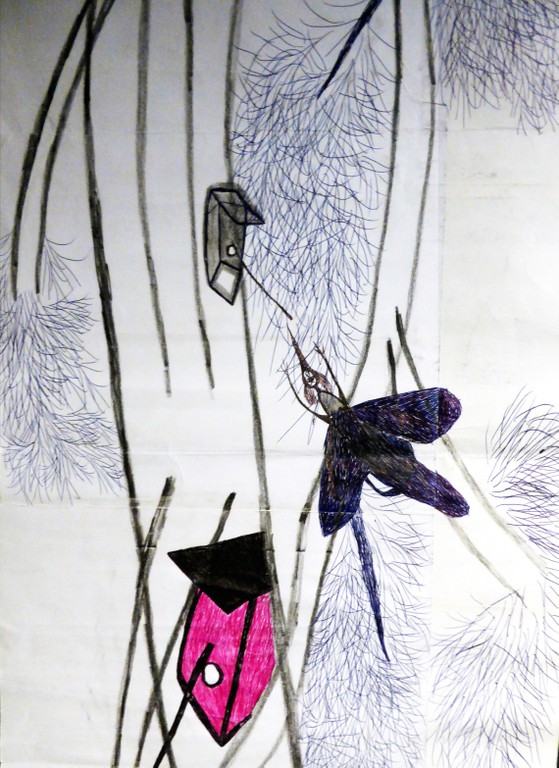 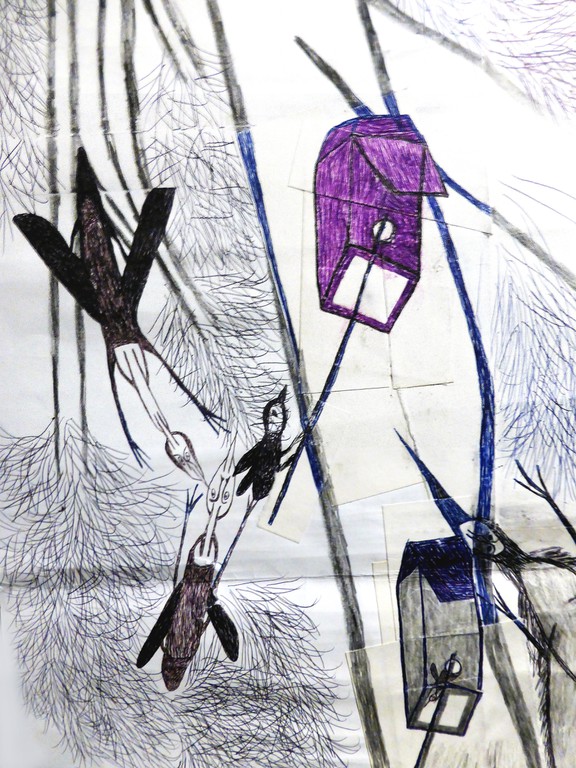 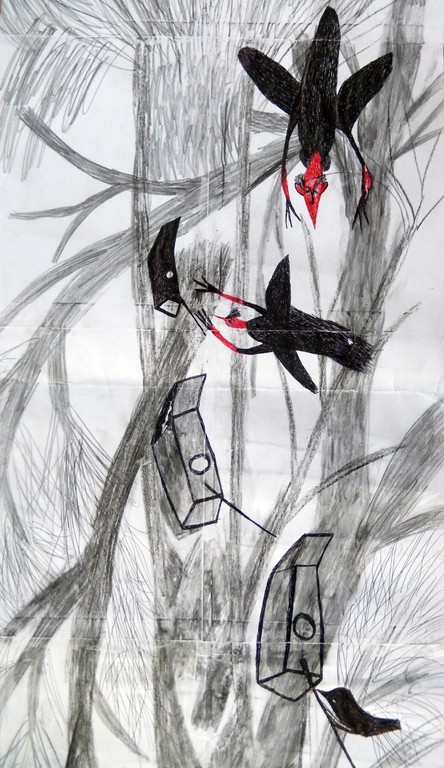 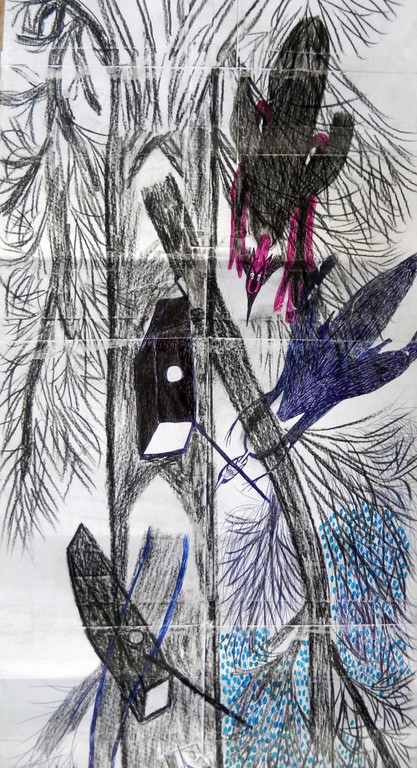 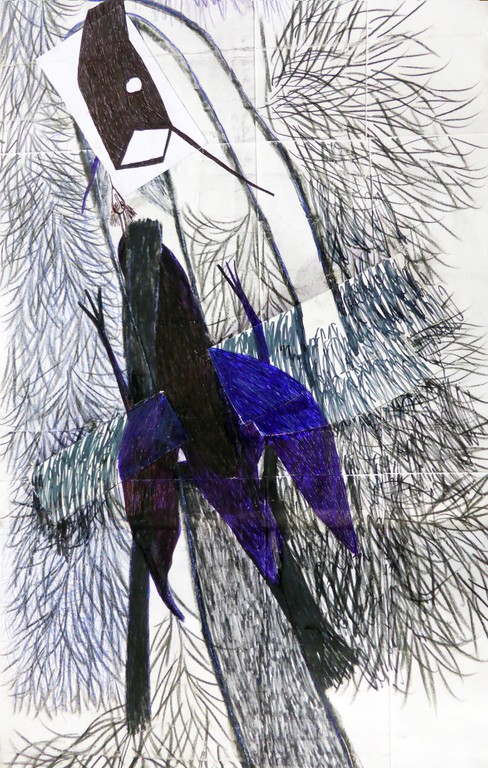