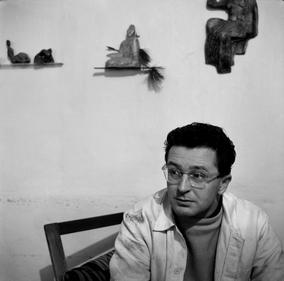 Attends a graduate course in Hořice. After the course is abolished, is employed by a construction company in Hostinné.

Fails the entrance exams at the Academy of Fine Arts in Prague.

Studies at the School of Applied Arts in Prague (since 1948 at the Academy of Arts, Architecture and Design) in the studio of prof. Josef Wagner. His classmates are Miloš Chlupáč, Věra Havlová, Eva Kmentová, Zdeněk Palcr, Alina Szapocznikovová, Olbram Zoubek.

Together with his wife he spends two semesters at the Academy of Fine Arts in Sofia under prof. Ivan Funěva.

Graduates from the Academy of Arts, Architecture and Design in Prague. Acquires a studio in Malátova Street in Smíchov, where he works until 1956.

Admitted to the II. Regional Center of the Union of Czechoslovak Graphic Artists, Umělecká beseda. Here he meets Václav Bartovský and other artists of the future UB12 Group.

Wins several competitions and executes public commissioins (relief for the House of Fashion in Prague 1955-1956, relief for the Czechoslovak Pavilion at the World Exhibition in Brussels, 1958, Karel Hynek Mácha’s memorial for Doksy, 1961.

His monograph on Jiří Šetlík was published by Publishing House of Czechoslovak Graphic Artists.

Builds a studio in Košíře, where he works until his death.

Mother passes away. First solo exhibition, Pendulums and other sculptures, takes place in the New Hall in Prague. Participates in the sculpture symposium in Liberec. At the World Exhibition in Montreal his sculpture Mother with a Child is placed in the Czechoslovak Pavilion.

Architectural work realized (paradise courtyard in the reconstructed George Monastery, sculptures with water components for Kajetan terraces and others).

Creates a monumental sculpture Threat of War for the Czechoslovak Pavilion at the World Exhibition in Osaka.
With the advent of Normalization, the group UB 12 began to dissolve and was officially banned in 1970.