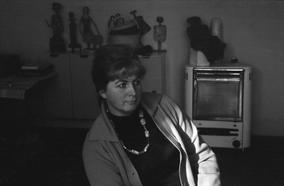 Attends elementary school. Studies at the Vocational School of Sculpture and Stonework in Hořice.

Studies at the School of Applied Arts in Prague in the studio of prof. Karel Dvořák.

Studies at the School of Applied Arts in Prague (since 1948 at the Academy of Arts, Architecture and Design) in the studio of prof. Josef Wagner. Her classmates are Vladimír Janoušek, Miloš Chlupáč, Eva Kmentová, Zdeněk Palcr, Alina Szapocznikovová, Olbram Zoubek.

Studies for two semesters at the Academy of Fine Arts in Sofia under prof. Ivan Funěv. Becomes acquainted with Bulgarian folk art and with ancient monuments on the territory of Bulgaria.

Admitted to the II. Regional Center of the Czechoslovak Technical University, Umělecká beseda. Here she meets Václav Bartovský and other artists of the future UB12 Group. She and her husband acquire a studio on Malátova Street in Smíchov.

During a trip to the USSR she visits Moscow, Leningrad, a Russian monastery and temples in Zagorsk, and the Cathedral of St. Sofia in Kiev. In Warsaw she visits the studio of Alina Szapoczniková.

Independent exhibition with Adriena Šimotová in the Hall of People’s Democracy on Charles Square. Starts working in her new studio in Břevnov. Here she creates her hand-sewn tapestries. Study trip to Paris.

Begins to use asbestos cement, masters welding technology, begins to create sculptures from coal slag, reliefs from white gypsum with elements of metal, sculptures and items from found objects, as well as her first collages from waste paper.

Visits Tigra Jiu in Romania, where she becomes acquainted with religious monuments, the work of Brancusi, and folk art.

Together with her husband, she builds a studio in Košíře, which becomes an important art center in the sixties.

Solo exhibition at the Václav Spála Gallery in Prague.

Trip to Egypt and Italy.

1970
With the advent of Normalization, the group UB 12 began to dissolve and was officially banned in 1970.