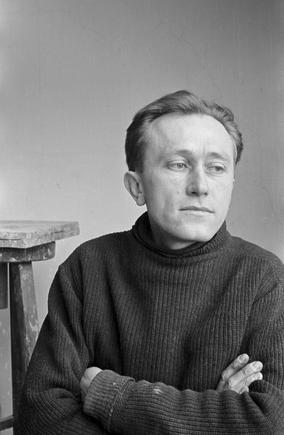 After Těšínská joins Poland, the family moves to Ostrava. He studies at the Real Gymnasium in Ostrava-Přívoz.

As a guest he exhibits at the member exhibition of the Moravian-Silesian Association of Fine Artists in the House of Arts in Ostrava.

Sent to forced labor mines in Ostrava. Passes the exams for the School of Applied Arts in Prague. However, the school is closed this year. Creates illustrations for books by Edgar Allen Poe, František Halas and Boris Pilňak. First meeting with Václav Boštík at the Vyšehrad publishing house.

Publishes his article “Response and Manifesto” in the periodical Nástup as a defense of modern art against ideological reproaches. Goes to Prague to study at the studio of applied graphics of prof. Antonín Strnadel. At the School of Applied Arts he meets students of prof. Kaplický - Jiří John, Adriena Simotová, Jiří Mrázek, Jiří Šindler. Starts working as a book graphic designer.

Creates a cycle of seven wood engravings for Václav Pour’s publishing house. Makes his first filmmaking experiment in an abandoned village in the border area. His sculptures of stones originate in the river bed of Bečva near Vsetín, which prefigures his later sculptural work in a fundamental way.

Graduates from the Academy of Arts, Architecture and Design. Illustrates Mickiewicz’s Ballads and Romances for the Vyšehrad publishing house (forbidden to be published). Begins to study stage design at the Theater Faculty under prof. František Tröster.

Admitted to the Czechoslovak Union of Graphic Artists. At the II. Regional Center in the loft of Umělecká beseda he meets Václav Bartovský and other future members of the UB12 Group. Works on theatre productions in Ostrava, Opava and for the National Theater in Prague.

Acquired a studio on Nad Královskou oborou 23 near the studios of Boštík, John and Bartovský. Marries the sculptor Vlasta Prachatická. Completes his studies in scenography. Remains at the Theater Faculty (until 1959) as a part-time stage teacher. He begins to occupy himself with sculpture seriously and systematically. Birth of daughter Markéta.

Participates in the Exhibition of Five Artists in the Aleš Hall of Umělecká beseda (Burant, John, Kolíbal, Prachatická, Šimotová). Trip to Greece. At the National Museum in Athens he encounters ancient Greek art and is especially impressed by statues from the Cyclades Islands. Illustrations to a fairy tale collection (this book becomes important for the development of Czech book illustration). Illustrations for books by Torquato Tasso and A. P. Chekov.

Co-organizer of and participant in the Art Exhibition of Young Artists of Czechoslovakia in the House of Arts in Brno. Co-founder of the Bloc of Creative Groups. Visits the world exhibition in Brussels. Discovers a monograph by Isam Noguchi and a book about Alexander Calder (becoming acquainted with the work of these two artists will change his current view of sculpture).

Trip to Egypt, Syria and Lebanon.

Creates sculptures for the Great Moravia exhibition at Prague Castle. Designs a solution for the supporting walls of the Nusle Bridge and a relief wall for the Czech Airlines office in Sofia. Trip to Italy. Attends the Venice Biennale. Attends an exhibition of Lucio Fontana in Milan. Elected to the management of the MSGR section (painters, sculptors and graphic designers).

Graphically prepares the monthly journal Fine Art until its demise in 1970 (together with Jiří Schmidt). Participates in the preparation of the Paris-Prague exhibition and installs the exhibition in Paris. His statue “Table” is selected by the Guggenheim Museum in New York for the Sculpture of Twenty Nations exhibition. Creates his first abstract sculptures.

In Paris he installs an exhibition of Czech cubism in the Musée National d’Art Modeme. Moves to a studio on Rooseveltova Street in Prague 6. Creates a roof garden for the Czechoslovak Pavilion at the World Exhibition in Montreal.

Installs an exhibition of Contemporary Czechoslovak Art in Turin as well as exhibits. Meets Lucio Fontana. First solo exhibition of sculptures in the New Hall in Prague. Receives an award in Bologna for illustrations to the book Crystal Sisters as well as an anniversary award from Albatros in Prague.

Participates in the organization of the exhibition New Sensitivity in Brno. Creates an 18m wall for the Czechoslovak Embassy in London. Study stay in Vence (southern France) in the studio of the Karoly Foundation. Attends a symposium in Korcula (Vela Luka), where he becomes friends with Achille Perilli.

Works on a sculpture for the Czechoslovak Pavilion in Osaka called Homage to Japan. Receives a six-month Ford Foundation scholarship, but the political situation does not allow him to travel.

Solo exhibition at Špála Gallery in Prague. Participates in the exhibition Between Man and Matter in Tokyo (a selection of the Japanese critic Yusuke Nakahara).
With the advent of Normalization, the group UB 12 began to dissolve and was officially banned in 1970.