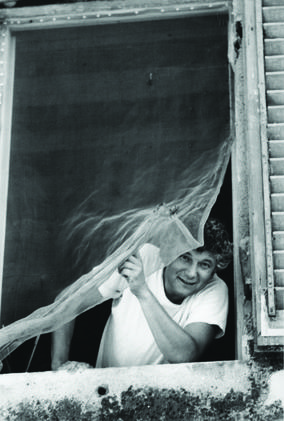 1956-62           Studies at the Jan Neruda Gymnasium in Hellichova Street, acquaintance with Jan Jedlička, especially in the course of art activities led by professor Jaroslav Divíšek.

1965                Second trip to Italy (Sicily) with Dušan Kadlec. Their late return leads to partial expulsion from the Academy - Rachlík and Kadlec continue to be students, but they can now work only from home.

1967-68           Final work for the Academy of Fine Arts: a cycle of five pictures of dystopian landscapes entitled Polittico.

Sept. 1968       Departure into emigration in Italy. Two years in Florence are followed by six years in Milan. He also works in parallel in an abandoned rustic house in the maritime landscape of Grosseto in Tuscany (until 1988).

1977 – 1979    He is the author of a number of theatrical stage sets, chiefly in cooperation with director Franco Enriquez.

1979 - 1982     Numerous series of so-called Walls come into being, compiled from dozens of male heads, rendered in a more or less fragmentary manner. Following on from these, from 1984 there are photographic pictures entitled Progressions, capturing the ideological course of the coming-into-being of a picture in dozens of photographs presented alongside one another.

1994 - 2004     Realisation of the stained glass of the windows and doors in the Church of the Assumption in Prato.

From 2000       Lives in Veiano in the Etruscan district close to Rome. Continues his stage design projects through cooperation with director and performer Ilaria Drago. Paints pictures of gardens.