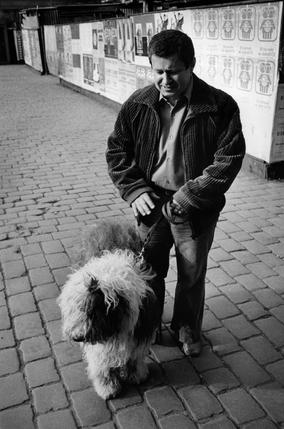 graphic artist, illustrator, animated film designer, film, theatre and exhibition poster designer and poet. He studied at the Academy of Fine Arts in Prague (1952–1956), Hochschule für Grafik und Buchkunst in Leipzig (1956–1959), and finished his studies at the Prague Academy (1961).

In the 1960s, besides illustration, he devoted himself to graphic layouts for the publishing houses Mladá Fronta and Československý Spisovatel and for almost two decades worked with his wife Eva Natus editing the journal Film a Doba (Film and Time). From the middle of the 1970s he collaborated on animated films. During this period Šalamoun’s graphic work began to evolve, but his illustrated work remains key and is represented by more than a hundred illustrated book titles. The fundamental relationship the artist has with the text – which he thinks through carefully and which becomes, in essence, a conversation – is projected onto his graphic works as well. His film work is dominated by the serial Maxidog Fík, of which there also exists a book version.

Jiří Šalamoun’s work is marked by a specific humour – primarily sarcastic, bitter, ironic and grotesque – something along the lines of his slightly older colleagues from the artistic group Šmidrs (K. Nepraš, J. Koblasa, B. Dlouhý, J. Vožniak, the music composer R. Komorous and the theoretician J. Kříž). Their grotesque humour, which represents a distancing from the unhappy Czech historical arc of the 20th century, also creates the context in Šalamoun’s work. Besides this specific grotesque perception, Šalamoun’s work is based on the need to create a story, develop, reveal and characterise its layers and then assemble it into his own interpretation or bitter commentary. This involves not only his illustration work, but also his work in graphics, film and poetry.