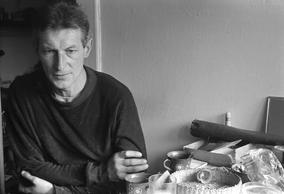 Graduates the grammar school in Třešť. Trains as a locksmith.

Works in a machine factory in Hedvikov. Creates his first line drawings for the local student journal Vítr.

Studies at the School of Applied Arts in Prague (since 1948 the Academy of Arts, Architecture and Design) in the studio of prof. Josef Kaplický, concurrently with Adriena Šimotová, Jiří Mrázek, Jiří Šindler, Jiří Schmidt. Through Jiří Mrázek he meets Václav Boštík.

Attends an exhibition by Josef Šíma in Prague’s Topič Salon.

Václav Boštík assigns his studio to Jiří John in Nad Královskou oborou 15 in Prague. A friendship develops between the two artists, which is of fundamental significance for both.

Begins his two-year military service and discovers the poetry of Boris Pasternak.

Marries Adriena Šimotová. Enters the II. Regional Center of the Czechoslovak Union of Graphic Artists, Umělecká beseda. Here he meets Václav Bartovský. Together with Václav Boštík, Stanislav Kolíbal, Daisy Mrázková, Jiří Mrázek and Adriena Šimotová, he participates in a non-public confrontational exhibition held in the studio of Václav Boštík. Temporary worker on archaeological surveys at the Golden Horse near Koněprus, and discovers the world of geological strata and spaces beneath the Earth’s surface.

Works with Václav Boštík at the Memorial of Jewish Victims of Nazism at the Pinkas Synagogue in Prague.

Visits Paris for the first time. Travels with an exhibition of children’s drawings from the Terezín concentration camp (together with Václav Boštík). Meets Jan Křížek.

Takes part in the Exhibition of Five Artists in the Aleš Hall of Umelecká beseda in Prague. Meets Věra and Vladimír Janoušková at the Regional Center of the Czechoslovak Union of Graphic Artists.

Works on illustrations to Michelangelo’s Sonnets.

Birth of son Martin. Solo exhibition in the Aleš Hall of Umělecká beseda.

Illustrates Dostoevsky’s novel The Insulted and the Injured (published by Svět sovětů). Appointed assistant professor at the Academy of Fine Arts in Prague, where he leads an evening drawing school. He regularly participates in international graphic art exhibitions where he receives numerous awards (1963 silver medal in Sao Paulo, 1965 fifth prize in Ljubljana; San Marino, Písek, 1966 in Lugano, 1969 in Ljubljana, Václav Hollar prize in Prague, 1970 prize for drawing in Rijeka).

Trip to Paris, where he met Josef Šíma. Studies the works of Joan Miró and Max Ernst. Alois Jirásek made a short film about Jiří John on a theme suggested by Jiří Šetlík.

Trip to Switzerland. Works on illustrations for the Lighthouses of Saint-John Pers for which he received the Mladá fronta publishing house prize in 1967.

Awarded the Klement Gottwald State Prize. Trip to France, where he meets with Josef Šíma at his retrospective exhibition in Paris.

Jaromír Zemina completes John’s monograph for the Obelisk publishing house (the book was not published until 1988 by Odeon).
With the advent of Normalization, the group UB 12 began to dissolve and was officially banned in 1970.