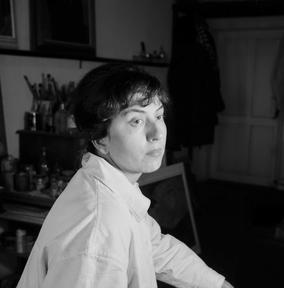 Studied at the Teacher’s Institute in Prague.

Passes the exams at the School of Applied Arts in Prague. Studies at the State Graphic School in Prague for several months. Attends evening drawing courses by Emanuel Frinta

Studies in the studio of prof. Antonín Strnadel. Meets Jiří Šindler and Václav Boštík. With the help of friends, she prints the manuscript Canticum trium puerorum.

Marries Jiří Mrázek. Spends a year in the Bohemian-Moravian Highlands in Březiny.

The Mrázeks move to an apartment on Sekaninova Street in Nusle. Daisy Mrázková focuses primarily on her three children, born between 1945-1949. She is unable to continue her studies at the School of Applied Arts. Meets Václav Bartovský. In the second half of the forties she devotes herself to wood engraving, and in the fifties primarily portraiture.

Takes part in the first confrontation in Boštík’s studio among Václav Boštík, Jiří John. Adriena Simotova, Stanislav and Kolibala, Vlasta Prachatická, Jiří Mrázek. The exhibition becomes one of the impulses for the creation of the UB12 Group.

At a poetry evening (Josef Červinka lectures on Morgenstern’s poems in Hiršal’s translation) she presents her works for the first time in Umělecká beseda.

First solo exhibition entitled Portraits (together with Vlasta Prachatická) in the Hall of People’s Democracy.

Paints landscapes with fragments of figures and faces and gradually comes to abstract works. In addition to working on paintings, she also writes and illustrates books for preschool children. In the field of children's books, during the sixties, she is an important writer and illustrator. Her illustrations and free painting are closely related and influence one another.

Solo exhibitions in the Václav Špála Gallery. Exhibits abstract images.
1970
With the advent of Normalization, the group UB 12 began to dissolve and was officially banned in 1970.