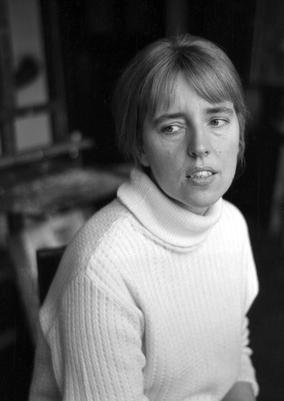 Studies at a private graphic school in Prague under prof. Jaroslav Šváb.

Studies at the School of Applied Arts in Prague (since 1948 at the Academy of Arts, Architecture and Design) in the studio of prof. Josef Kaplický. Her classmates are Jiří Mrázek, Jiří John, Jiří Šindler. Jiří Mrázek introduced her to Václav Boštík.

Admitted to the II. Regional Center of the Czechoslovak Union of Graphic Artists, where she meets Václav Bartovský and becomes close friends with Věra Janoušková and Vladimír Janoušek.

Participates in the Exhibition of Five Artists in the Aleš Hall of Umělecká beseda in Prague.

A trip to Paris with the Institute of Housing Culture. Creates pictures of lyrical abstraction.

Birth of son Martin. Solo exhibition (with Věra Janoušková) in the Hall of People’s Democracy in Prague.

Independent exhibition in the Gallery of the Czechoslovak Writer in Prague. From this collection is selected a number of monotypes and gouaches for the Biennial in Sao Paulo and the International Biennial of Youth in San Marino.

Participates in the International Biennial of Graphic Arts in Ljubljana to which she regularly contributes until 1983. Creates paintings and drawings close to the style of new figuration.

Independent exhibition in the Václav Špála Gallery. Trip to Paris with Jiří John to attend the exhibition of Josef Šíma at the Musée d’Art Moderne. Meets Josef Šíma.

Trip with Jiří John to Paris, where she again meets with Šíma in his studio.

Independent exhibition in the Václav Špála Gallery. Gold medal at the International Biennale of Graphics in Florence.
With the advent of Normalization, the group UB 12 began to dissolve and was officially banned in 1970.