Curator David Bartoň; Adam Drda is the co-curator of the exhibition of the works of Gertruda Gruber Göpfertová


"After Kyjov we walked arm in arm? Damn, damn, what were people saying ?"
(R. Jičín, Beneath the Sun of Ludibrionism)

“But how are we to come to terms with a genuine work of art, something that is predicated on the fact we must continually and again remind ourselves what a work of art and our criticism of it is?”
(Z. Vašíček)

What is a work of art? How can one differentiate an artistic work from the flood of items passed off as art? Who is an artist? Are the two somehow tied to a place and origin? Does art emerge from a concrete locale?

The city of Kyjov is called Gaya in German. Gaya is an ancient word, which since the time of the Greeks has signified the earth as the fundament and foundation. It was in Moravian Kyjov that the fates of the ingenious inventor Květoš Vašíček, his son Zdeněk, a philosopher, his friend, the painter and thinker, Miroslav Tichý, and the philosopher Rudolf Jičín all intersected. During her studies here, Gertruda Goepfertová also began writing and painting. It is tempting to resort to the phrase “genius loci.” Furthermore, all of the aforementioned artists spent most of their lives in various types of emigration. They were all threatened by the regime controlled from Moscow, and they all were affected by repression. These, however, were merely the external conditions into which fate had placed them. Of course, it was primarily a matter of how these conditions were accepted and how they affected the character of the artist and his or her work. All are recluses; they created and continue to create out of some sort of necessity. They were all sui generis outsiders, which is not, as Z. Vašíček writes, so easy. “Every outsider is different; only the successful are the same.” Their internal worlds, bound for a time with the same place, refer to another world — Gaya, to “another Kyjov.” An artist’s original and genuine achievement emerges from a connection with a reality that is not limited to a specific place. It is something beyond a vision, a construct, something beyond biases, and it cannot be “engaged” or connected to any sort of ideology, worldview, or even national sentiment. This Gaya, this reality, is available only to the one who is alone and who has acquired the ability to see the genuine beneath the ballast of schemata cultivated by society, deeply rooted opinions, and the deception of shared fictions. The life and work bear testimony to what the artist and philosopher have glimpsed. “Artistic works come into existence not for the sake of the result, but for the sake of the artistic means of self-knowledge. The person is more highly valued than the artist; artistry gives way and occupies a secondary place” (F. X. Šalda).

Works stand side by side in our exhibition so that, through their through their juxtaposition and combined effect, the viewer will come to know what “seeing” in the proper sense means. As Marcus Aurelius writes, “They know not how many things are signified by the words stealing, sowing, buying, keeping quiet, seeing what ought to be done; for this is not effected by the eyes, but by another kind of vision.” It is then up to the viewer to seek out a glimpse of his own “other Kyjov” with his own “other vision.”
David Bartoň

While examining the exhibition, you will have the opportunity to listen to the curators’ commentary; the exhibition is introduced by David Bartoň in a conversation with Karel Oujezdský.

was an artist who found expression in painting, later photography, but primarily his way of living, a concept involving all aspects of his life in Kyjov. 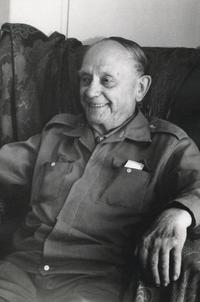 The work of Květoslav Vašíček does not have much in common with the development of modern art, even though most of his work could stand up to Duchamp’s famous “Bottle Dryer.” Modernism meant a radical deviation from the story, and narrativity was considered a mortal sin. Art was supposed to covertly embody pure ideas whose complex exposure and illumination has occupied a league of art experts. In this light, Duchamp’s collection of objects exceeds entirely any ideological framework and becomes a historical image, which, to be sure, says something about a specific time and place, but also carries within itself timeless aspects of the myth of human ingenuity and indefatigability.

Květoslav Vašíček was not motivated by artistic ambition. His incentives were purely existential. When the Communists nationalized his ironworks in 1948 in his native Kyjov, he began working as a locksmith in a glassworks. He did not expect the new regime to last long and therefore secretly prepared at home to renew his trade. He collected and stored up a varied assortment of iron and kitchen wares, especially wooden and metal screws. As he found out later in the 1990s, he had a larger collection than in Paris hardware stores. To beat out any possible competition, he supplemented his storehouse with artifacts of his own design, as well. During the production these works, he hit upon various minor improvements.

The regime remained firmly in power, and his dream of resurrecting his business was growing more and more unrealizable. Květoslav’s inventions slowly began to lose their unambiguous practical purpose. His creative absorption and sudden inspiration pushed considerations of utility to the background. His son Pavel Vašíček recalls how, during one of his visits to his father, they were struggling to cut up a smoked pork knuckle. When he visited Květoslav again two weeks later, he marveled at the brand-new “pork knuckle saw,” which his father had fashioned in the interim. Of course, it was such a specialized instrument that its practical uses could be counted on the fingers of one hand. On the other hand, his “nighttime chronometer” could be used nightly. It was a wooden box containing a light bulb into which would place his wristwatch at night. This allowed him to view the time in the dark without waking his wife.

At his peak, Květoš suppressed entirely the businessman within him and offered his inventions to his neighbors free of charge. His “grating apparatus” met with great success, whereas his “entire cauliflower head cooking apparatus,” despite Květoslav’s valiant efforts, did not achieve the popularity he had envisioned. Over time, most of his metal goods and many of his early artifacts succumbed to corrosion and had to be discarded. His sons Zdeněk and Pavel were arrested and jailed as political prisoners; their mother fell ill; and Květoš’s health abandoned him as well. As his sight gradually failed, he created lamps of various sizes, whose electrical connections would send chills up one’s spine today. Their house, however, did not burn to the ground. Three years before Kvetoslav’s 90th birthday, the regime fell. At this point he realized that his kitchen aids could hardly compete with the influx of Western goods, and he decided to concentrate on metal “potable water carriers.” Here his late work concludes.

The mind boggles at the number of gadgets that bear witness to the existence of an enigmatic character who, for almost half a century, devoted his work and energy to supporting and caring for his family. We all certainly have our own experiences with all sorts of do-it-yourselfers. Every now and then we see preposterous architecture among the colonies of cottages. We have all witnessed how monstrous ornaments can emerge when a handyman gets hold of some welding equipment. We have all have visited homes upon which the owner’s own creative ingenuity was stamped like an elephant’s foot. Do-it-yourself artifacts from the era of totalitarianism bear witness to the way one treated the only freedom that remained. By comparison, the work of Květoslav Vašíček, despite a certain eccentricity, comes across with a certain respectability. A freedom that is limited can be inspirational. What Květoslav’s artifacts to not possess is the usual ornamentality, sentimental coziness, and nostalgia. Each object attests , briefly and idiosyncratically, to a concrete problem of everyday life.

Whereas the modernist Duchamp tore objects from their utility in order to elevate them aesthetically, Květoslav Vašíček sought new paths to utility. In an era of astonishing yet highly impractical ideas, he invented instruments to better deal with the world, if only in the kitchen. Thereby, he brought back to life what the modernists had rendered lifeless.