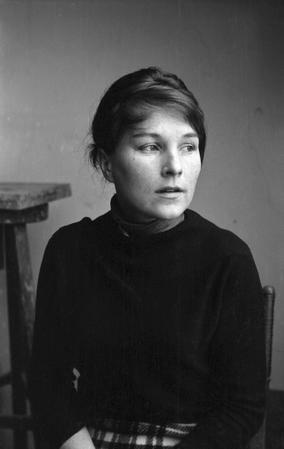 Attended the Secondary School of Stone Sculpture in Hořice, where she worked under the guidance of prof. Jaroslav Plichta (student of J. V. Myslbek). She passes the exams (at the age of 16) at the Academy of Fine Arts in Prague in the studio of prof. Otakar Španiel. Her classmates are Marie Uchytilová-Kučová, Milan Knobloch, Jan Mathé, Jan Kulich. Lives in Prague with her aunt, wife of cellist prof. K. P. Sádla.

Begins work in the studio at Nad Královskou oborou 23 (until 1962).

Takes part in the Exhibition of Five Artists in the Aleš Hall of Umělecká beseda in Prague.

Takes part in the Exhibition of Five Sculptors in the Václav Špála Gallery (Kmentová, Pacík, Prachatická, Vinopalová, Zoubek). Exhibits at the Sculpture Biennale in Middelheim (Belgium).

Wins the competition for a portrait of Jan Masaryk for the entrance hall of the Czernin Palace of the Ministry of Foreign Affairs of the Czechoslovak Republic. However, due to the change in political conditions, the bust is never displayed. Works on a portrait of Ludwig van Beethoven for the Castle Hradec nad Moravicí.

Creates a commemorative plaque for the composer J. B. Foerster for his house in Vienna.
With the advent of Normalization, the group UB 12 began to dissolve and was officially banned in 1970.