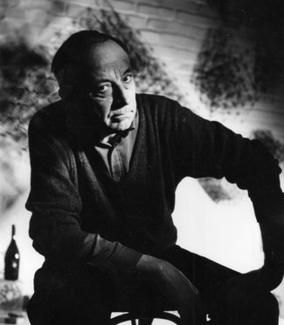 František Kyncl spent his youth in Pardubice, where he returned after completing his art studies and fulfilling his army duties at the Army Art Studio. In Pardubice he worked as a graphic artist in advertising, on his own art projects and co-founded the Young Ones Group. He had close ties with a group of young Polish artists, especially with Marian Bogusz, and participated in their symposiums in Poland. In 1962 he visited the former Soviet Union, where in Leningrad (now Saint Petersburg) he discovers the Russian avantgarde art and constructivism of the 20's. A few years later, in 1966, he takes the opportunity to briefly visit Austria and Italy – and in Rome he makes an important encounter with the paintings of Lucio Fontana. In 1968 he organized, together with the Young Ones Group, an international symposium – Artchemo in Pardubice. In 1968 he received official approval to visit Austria again from the Association of Czechoslovak Fine Artists. There, in 1969, he received a letter from his father informing him that he has been sentenced in absentia to time in prison for leaving the country without permission. The same year František Kyncl left Austria and moved to West Germany, at first to Essen where he worked as a labourer and later as a salesman of luxury carpets. After his first solo exhibition in Essen, Professor Hoehme accepts him in his class at the Düsseldorf Academy of Fine Arts. He lives in Düsseldorf with his wife Elsi util his dead on 14. July 2011.