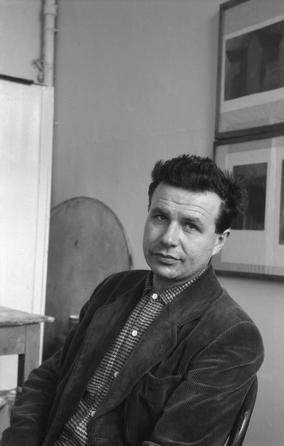 Studies drawing and descriptive geometry at the Czech Technical University in Prague.

Studies painting at the Academy of Fine Arts in Prague under prof. Willi Nowak. During this time he meets the sculptor Jan Křížek.

Becomes a member of Umělecká beseda. Gets married. The Boštík family have five children. Creates his first abstract drawings.

Completes his studies at the Academy of Fine Arts in Prague in the graphic studio. Through Jiří Mrázek he meets the students of the School of Applied Arts, future members of UB12.

Employed as a laboratory technician and photographer in the Laboratory of higher nervous activity of the Czechoslovak Academy of Sciences.

Together with Jiří John implements the Memorial of Jewish Victims of Nazism in the Pinkas Synagogue in Prague.

Trip to Paris with Jiří John (with an exhibition of children’s drawings from the Terezín concentration camp).

Solo exhibition at the Aleš Hall of Umělecká beseda in Prague.

Solo exhibition in the New Hall in Prague. A six-month stay in Paris.

1970
With the advent of Normalization, the group UB 12 began to dissolve and was officially banned in 1970.